I bet that title has confused you *snigger* 😉

The third (and probably my favourite) character from “Still” let me introduce you to Ronnie, but I guess he could have been a Ronald 😉 Please excuse any errors, this is taken from my note book.

Ronnie was born in February 1953 to an Irish father and English mother who were never actually married. His parents lived on a Council Estate in Lee, South East London. The youngest son of 4 boys he was a tear away (so his mother Liz said) from the moment he could walk.

Curly auburn hair when he was a toddler (which, as an adult only begins to curl when he needs a haircut) and deep blue eyes like his fathers, his ruddy complexion meant that he always looked like he’d been dashing around, but then, most of the time he had. He always had an abundance of energy that continued into adulthood.

Not doing well in school he preferred to play truant and found himself in detention frequently. His mother despaired, but he was her favourite. When he was 12 his father Patrick left the family and went back to Ireland because he couldn’t find work, leaving his mother to bring up the four boys on her own. At secondary school he met Daniel and they became best friends. Although from very different backgrounds the boys shared a love of fishing. It was the only thing he could really remember doing with his father.

At 15 he left school and got himself an apprenticeship with a local builder. He enjoyed being outside, the manual work and the banter with the other workers. But with two of his older brothers involved in petty crime it wasn’t long before he found himself with a police caution.

At 17 he met Laura, a girl who served him in a local café where he and Daniel often met. He asked her out and within weeks they become “a couple” spending a lot of time at the local pub and having a weekend away at his aunts caravan. They were inseparable for a year.

Ronnie started to get friendly with a group who knew his brothers and they introduced him to drugs. His relationship with Laura suffered, and Ronnie moved out of home and into a squat. He and Laura split up and his is mother Liz contacted his father because she was worried.

His father Patrick returned to London in 1972 and with their parents back together the whole family moved back to Ireland, his mother agreeing as she wanted to get Ronnie away from the drug culture he had become embroiled in.

Ronnies father was a struggling builder, but with the help of his sons they made a success of the business and it thrived. He often thought about Laura and Daniel, wondered what happened to them, but as the years went by he put them to the back of his mind.

With a huge zest for life he likes to play practical jokes and to be the center of attention. In his early 20’s he married an Irish girl, but they divorced after only 3 years with no children. Ronnie threw himself into work and with 7 nieces and nephews he was content to stay single and still play the field.

He still walks with the arrogant swagger he had as a teenager, but at 45 he is lonely, realising that he can no longer chat up women like he used to. One of his brothers has suggested he use a dating agency, but he is too embarrassed. Loyal, attractive for his age (although grey and balding) and with a successful business, he is still hot headed. He plays golf with his brothers.

He receives a letter from a young woman in Kent called Ruby, who thinks she may be his daughter and they speak on the telephone. The old memories of Laura and Daniel come flooding back and he immediately makes plans to travel to Kent. He is excited at the prospect of being a father, but even more so about seeing Laura. He regrets the way he treated her and wants to make amends.

So what has my character Ronnie got to do with Bedtime for Bonzo? I’m kinda thinking that Ronnie’s mum had a bit of a thing for Ronald Reagan 😉 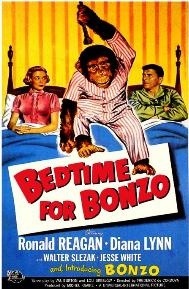 24 thoughts on “Bedtime For Bonzo?”