I like Mondays 🙂 Have I said that before? Lol

Today, The Hubster came up to London with me and we ended up having lunch in the gorgeous restaurant in The Wallace Collection The beautiful Hertford House is a museum open to the public with a large art collection. Yes, my lunch involved cake…..a Pistachio Fondant served with Mango Sorbet. DELICIOUS! Although, I must admit, not very pretty 😉 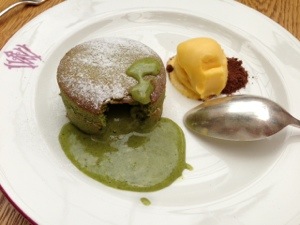 A mooch round the museum, admiring the Rembrandt’s, Canaletto’s and Gainsborough’s and then it was off to the book shop where I couldn’t resist these two.

Appropriate, as Rachel Joyce is a Faber graduate.

Tonight’s class was with Ewan Morrison, which I was really looking forward to having read about him and his work. At the moment I’m reading Close Your Eyes which looks promising. He’s the only guest we’ve had so far who I’ve asked to sign a book for me 🙂

Mr Morrison is known for his experimentation with structure. He likes to push boundaries and explore different ways of reinventing the novel.

Some of my notes:

Break free from the narrative novel. Stop thinking about the novel, think about the writing. If a subject interests you, take it to the limit.

He will put in a factual list as opposed to trying to weave in backstory. Do we even need backstory?

He’s a huge fan of writing in 2nd person POV. He feels it gives his writing a sense of panic.

He enjoys a challenge and that is why his novels don’t have a standard structure.

Don’t worry about the publishing industry…write the book that you want to write.

Study the hell out of a book you love. Write a sentence for every chapter. He taught himself how to write by studying Revolutionary Road.

He’s cynical of the idea that a protagonist shapes their own life, because in the real world outside forces that are out of our control are actually what shapes people.

Every book he writes he comes up with a new way of working. The book he’s writing now is being written in cheap exercise books in longhand.

He recommends long hand for all first drafts so that when you type it up, that becomes your 2nd draft and gives you the opportunity to change things.

At this point I’d just like to say I LOVE THIS GUY!

Mr Morrison believes that the standard narrative novel’s time is nearly up. And that in today’s society, where we are bombarded with information from all angles, people are turning more to eBooks because they’re easy to dip in and out of and often, readers only read the first 10 pages of a book anyway. He asked…..How many people who actually bought or downloaded 50 Shades actually read it all the way to the end? What do you think? Is the traditional 300 page chronological structured narrative novel old fashioned?