Dominics photo this week prompted the following scene. At some stage in the future perhaps i can extend it 😉 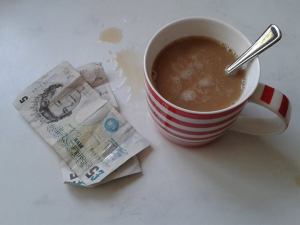 Bradley sat down at the sticky coffee stained table and stirred the dishwater he had been sold under the guise of coffee. The windows in Caff’s Caff were steamed up to the point where you couldn’t tell if it was day or night outside, and Bradley couldn’t remember.

Stretching he managed to get two fingers into his jeans pocket and pulled out two crumpled £5 notes. It was all that was left of the £300 he’d withdrawn from his bank account last week. He should have taken more, but that wouldn’t have been fair on Chloe, she had the kids to think about. The kids…it was the first time he had thought about them since last Thursday. They would be confused, but better now, at their age, than later, when they could ask questions. They would soon forget.

Taking a mouthful of lukewarm coffee he glanced around the cafe, avoiding eye contact. A middle aged man wearing a Hi Viz vest was reading a newspaper. Bradley’s heart raced as he realised that staring back at him from the front page of The Daily Mirror was his own face. He put his head down and pulled the hood of his jacket over his dirty matted hair.

Oooooo…who is Bradley? And why has he run away?