Jeff Goins told me to share this, so I will 🙂

THE TIME IS NOW!

What creative thing will you do today?

Some of you may remember my review of Jeff Goins You Are A Writer e book last month. No? Ok, find it here

Jeff held a competition but I didn’t have the guts to enter lol. A couple of days ago, the winner was announced. Dustin M Smith who blogs at Propensity For Curiosity won with this brilliant video 🙂

Now, doesn’t that give you a warm and fuzzy feeling? 🙂

As for me, am I still trying to believe I am a writer? Well, I managed to put it on my Facebook profile, that’s a start isn’t it? Lol 😉

Dustin talks about the fact that what he used to write was safe. Ahhhh, yeah, I think I’m very much the same. There is a lady in my writing class who is writing a novel that is a mixture of 2 different POV’s. When I asked her why, she said she was experimenting. Hmmmmm, I never experiment. So perhaps I should? do you experiment with your writing? And if you do, what kind of things have you tried? *goes off to attempt some deep and meaningful poetry*

Tonight, I’m going to a Nanowrimo event to meet Chris Baty…..yep, IN THE FLESH!

Yesterday’s postcard from the Tate prompted a story for me about a guy who had been thrown out of his apartment, on to the street. All he has left in the world is the sofa and some black bags. The question is….why has he been thrown out? I’m kind of thinking along the lines that he’s divorced, and lives with his son. His son has got involved with some very dodgy characters, which has resulted in the fact that he’s taken all his dads money to pay the debts off….and now he’s disappeared……

I’m guest posting today, over at Creative Writing Studies for the lovely Anthony Haynes. Go and have a peek to read me talking about why I blog, and what I LOVE about it! 🙂

I’ve had a pretty productive week 🙂

1. Turn the prologue back into 3rd person (again lol).
DONE!

2. Try to nail chapter one, so that I have something to read out at class on Wednesday night.
DONE!

3. Finish sorting out the formatting/layout of the whole thing.
HALF WAY THROUGH!

4. Have another read through and work on the ending. I think I’ve worked out where I want it to go, I’ve just got to write it now, which means changing stuff in other places. So yep, I’ve been avoiding that lol.
NOT EVEN ATTEMPTED!

Oh dear, well ok, it wasn’t that productive. I don’t know why I’m avoiding it so much. No, yes, sorry, I do….because its hard work, because I’m confused and don’t know exactly what I want to happen, because I know it will mean changing other stuff that I’ve already written 😦

So this weeks goals are:

1. Finish sorting out the formatting/layout of the whole thing, and I mean REALLY finish lol.

2. Have another tinker with the Blurb.

3. Try to do something constructive towards the ending, even if it’s only 500 bloody words! Lol.

4. Get Chapter 2 sorted, polished up and in ship shape 😉

I’ve come to the conclusion that overwhelming myself with a to do list doesn’t achieve anything, so I’m trying to be a little easier on myself (ha ha ha).

so what are your writing plans for the week?

I’ve been following Jeff Goins excellent blog for a few months now. So when I received an e mail update asking for people to review his new book I jumped at the chance 🙂

I received the eBook a few days ago, and I read the whole thing that same day! WOW! I guess being a fan of Jeffs blog means that it was inevitable that I would love the book. So am I biased? Probably lol 😉 No, seriously, it’s thoroughly enjoyable, with some great advice to us “aspiring” writers. Lots of info on Platform Building, connecting with other writers and what to do before you even get published.

But it was the first part of the book that hit me straight in the face, because it talks about the one thing that plagues me….. The whole idea of calling myself a writer. I’ve talked before on my blog about not being able to bring myself to say that. I feel a fraud, like, if I say, “Hi, my names Vikki and I’m a writer.” someone will jump up and say “No you’re not, you haven’t had anything published.” I even had a brief discussion about it recently with Chris on Write To Perfect (see the comments for an excellent article Chris recommends).

Jeff’s book wagged its finger at me lol….. He asked Steven Pressfield what he meant by “turning pro in your head before you can do it on paper.” (from Pressfield’s book The War of Art). He asked Mr Pressfield “When do you really become a writer? Is it when you get an agent? When you sign your first book contract? When you sell 10,000 copies?”

The response from Mr Pressfield was…… “When you say you are.”

So Jeff started making public declarations of his identity as a writer, and actually started believing it. And because he believed it, he started acting like one. Jeff learnt that before others will believe you’re a writer, you have to believe it yourself 🙂

So is it time for me to submit, surrender to something I’ve been resisting as Jeff says? Ok, I’m going to give this a go…..ready…… 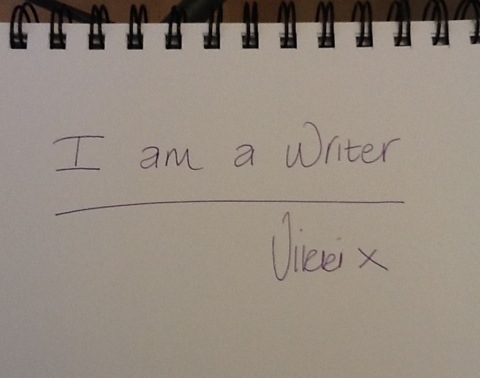 Jeff suggests that I write I Am A Writer everyday….”affirming something deep inside of you that you’ve been resisting.” And hell, have I been resisting!!!!!!

There’s a web site You Are A Writer to accompany the book so I hope you check it out.

So thanks Jeff, for the opportunity to read your book, and the pep talk 😉 I’m going to give it a go….I’ll start with my FaceBook profile *gulp* 🙂

Do you struggle telling people you’re a “writer”?